By David Ardia on January 15, 2021 in Center for Media Law and Policy, Internet, Journalism 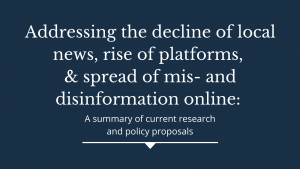 I’m thrilled to announce that the Center for Media Law and Policy recently published a research paper titled “Addressing the Decline of Local News, Rise of Platforms, and Spread of Mis- and Disinformation Online: A Summary of Current Research and Policy Proposals.”

The whitepaper grew out of a workshop the Center hosted in November 2019 in conjunction with the UNC Center for Innovation and Sustainability in Local Media and UNC Center for Information, Technology, and Public Life (CITAP), which brought together experts on the decline of local news, the rise of online platforms, and the spread of mis- and disinformation. The workshop was part of a two-day, interdisciplinary conference titled “Fostering an Informed Society: The Role of the First Amendment in Strengthening Local News and Democracy.” The conference began with a symposium at the UNC School of Law hosted by the First Amendment Law Review that examined the role of the First Amendment in creating an informed society and explored whether the Constitution places affirmative obligations on the government to ensure that citizens are informed.

The workshop, which is the subject of this whitepaper, took place on the second day at the UNC Hussman School of Journalism and Media and was co-led by Philip Napoli, James R. Shepley Professor of Public Policy at the Sanford School of Public Policy at Duke University. A full list of workshop attendees is included in Appendix A.

The whitepaper is organized in the same way we structured the workshop, starting with an overview of the decline of local news followed by a discussion of the rise of platforms and the spread of mis- and disinformation online. We then examine a number of regulatory and policy responses to the problems identified in the earlier sections and conclude by offering some suggestions for next steps. In Appendix B we provide a list of recent research and resources available for those who wish to engage in more study of these important issues.

Here is the abstract:

Technological and economic assaults have destroyed the for-profit business model that sustained local journalism in this country for two centuries. While the advertising-based model for local news has been under threat for many years, the COVID-19 pandemic and recession have created what some describe as an “extinction level” threat for local newspapers and other struggling news outlets. More than one-fourth of the country’s newspapers have disappeared, leaving residents in thousands of communities living in vast news deserts.

As local news sources decline, a growing proportion of Americans are getting their news and other information from social media. This raises serious concerns, including the spread of misinformation and the use of platform infrastructure to engage in disinformation campaigns. Platforms wield significant advantages over local news sources in the current information environment: the dominant platforms possess proprietary, detailed caches of user data, which the platforms use to force advertisers, users, and news outlets into asymmetrical relationships. In the vacuum left by the disappearance of local news sources, users are increasingly reliant on information sources that are incomplete, and may be misleading or deceptive.

This whitepaper examines current research related to the decline of local news, the rise of platforms, and the spread of mis- and disinformation and explores potential regulatory and policy responses to these issues. Some proposals focus on increasing the supply of – and demand for – local news, including increased public education and expanded support for journalists and local news organizations. Other proposals focus on market-based reforms that address the growing power disparities between news producers and platform operators as well as between platforms and their users.

Solutions to the difficult problems we face will require a multifaceted, multi-disciplinary approach. No one lever within the market, law, or society will deliver a magic bullet. Instead, experts and policymakers will need to pull at multiple levers using a new vocabulary to talk across the different disciplines – a set of new propositions that recognize the legal, social, journalistic, and economic principles at stake, particularly the harm done to democracy if the status quo continues.

You can download the full paper here or from SSRN.