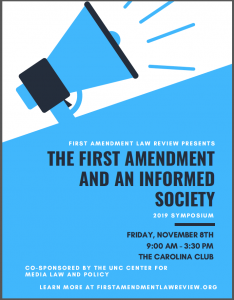 On November 8-9, the UNC Center for Media Law and Policy will be joining with the First Amendment Law Review and Center for Information, Technology, and Public Life (CITAP) to host a symposium and summit focused on fostering an informed society. This two-day conference at the UNC School of Law and UNC Hussman School of Journalism and Media will examine the role of the First Amendment in creating an informed society and explore legal and policy interventions that support the creation and dissemination of information that meets the needs of American democracy. The interdisciplinary event will bring together a wide range of media professionals and scholars, including experts on the First Amendment’s speech and press clauses, media business models, antitrust law, FCC’s media ownership rules, net neutrality, intellectual property,  and journalism, as well as others whose work deals with media business and First Amendment issues.

Day one kicks off with a symposium hosted by the First Amendment Law Review that will examine the role of the First Amendment in creating an informed society. It will take place at the George Watts Hill Alumni Center at the University of North Carolina at Chapel Hill. The symposium is free and open to the public, but we do ask that you register in advance.

The second day will consist of an invitation-only summit/workshop at the UNC Hussman School of Journalism and Media. It will focus on potential legal and policy responses to the decline of local news reporting, the growth of news deserts, and the rise of mis/disinformation online.

Funding for this event is being provided by the Hearst Foundations and UNC School of Law.

DAY 1
November 8, 2019
Symposium: The First Amendment and an Informed Society

The symposium will begin with a conversation between Leonard Downie Jr., Weil Family Professor of Journalism at the Cronkite School at Arizona State University and former executive editor and vice president of The Washington Post, and Robert Kaiser, former managing editor at The Post and author of eight books.

Downie and Kaiser will discuss the challenges facing American journalism.  In 2002, they co-wrote “The News About the News: American Journalism in Peril” and are working on a follow-up to that important, but sobering, examination of journalism at the turn of this century. Downie is also the author, along with Michael Schudson, of a major report on the state of the news media, “The Reconstruction of American Journalism,” published by the Columbia University Graduate School of Journalism in 2009.

Panel 1: The First Amendment’s Structural Role in Our Democracy

The panel will be moderated by Bill Marshall, William Rand Kenan, Jr. Distinguished Professor of Law at UNC School of Law. Confirmed Panelists:

Panel 2: The First Amendment and the Declining Fourth Estate

The second panel will examine whether the First Amendment is indifferent to journalism as a means of informing society and to the broader changes in the institutional landscape of free expression, including the proliferation of private platforms that facilitate and moderate public debate. Panelists will also discuss what government, private parties — and individuals themselves — can do to ensure that public discourse is informed.

The panel will be moderated by Wendy Scott, Associate Dean for Academic Success and Professor of Law at Elon Law. Confirmed Panelists:

The panel will be moderated by David Ardia, Reef C. Ivey II Excellence Fund Term Professor of Law and faculty co-director of the UNC Center for Media Law and Policy. Confirmed Panelists:

The symposium on November 8 is free and open to the public, but we ask that you please register in advance.  There also is an option to purchase lunch or receive CLE credit (online or in person).

This invitation-only summit/workshop will address the potential legal and policy responses to the decline of local news reporting, the growth of news deserts, and the rise of mis/disinformation online. Many of the panelists from the first day’s symposium will be attending the summit. They will be joined by media executives, policymakers, economists, social scientists, lawyers, and others with expertise in journalism, media economics, media business models, antitrust law, FCC policy, intellectual property, and constitutional law.