By Victoria Ekstrand on May 20, 2019 in Center for Media Law and Policy

We’re excited to announce and share the results of our first-ever campus climate survey about freedom of speech and press issues on the UNC campus. The report can be accessed here: UNCCampusFreeExpressionReport2019. 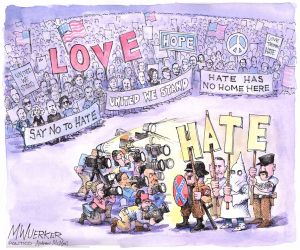 , in conjunction with an undergraduate class at the UNC School of Media and Journalism and the UNC Office for Undergraduate Research, conducted a campuswide representative study of undergraduate students. The survey investigated students’ knowledge of First Amendment protections for different types of speech, students’ support for free expression of unpopular opinions on campus, their experiences with controversial speech in the classroom, and their attitudes towards hate speech, invited speakers, and UNC’s Confederate Monument known as Silent Sam.

The impetus for the survey was the passage of the 2017 Restore/Preserve Campus Free Speech Act by the North Carolina State Legislature. The new law, prompted in part by the threat of violence and cancellation of campus speakers at universities nationwide, sought to ensure “free, robust, and uninhibited debate and deliberation by students of constituent institutions” and established freedom of speech as a “fundamental right” across UNC member institutions. Modeled after proposed legislation by the conservative Goldwater Institute, the new law requires those institutions to retain their “viewpoint neutrality” on “the public controversies of the day” and allow for discussion and assembly on campus consistent with constitutional time, place, and manner restrictions “necessary to achieve a significant institutional interest.” The law also carries sanctions for anyone who “substantially disrupts the functioning of the constituent institution or substantially interferes with the protected free expression rights of others.” Those penalties include suspension and dismissal of students in violation of the law.

To investigate the actual state of student understanding of the First Amendment and attitudes toward freedom of expression, this survey of UNC undergraduate students sought to explore their knowledge, attitudes, and behaviors regarding First Amendment protected expression on campus.

The survey found that students have a moderate level of knowledge about First Amendment protections for speech at a public university, and that they prefer an open learning environment where students are exposed to a wide range of views and opinions. Students also generally welcome guest speakers whose views might be considered controversial and are willing to express disagreements using counterspeech means. Support for student media is strong, although use of student media is low.

Despite generally strong support for freedom of speech and controversial speakers on campus, students reported feeling less comfort discussing controversial subjects in classroom settings than in non-academic settings with peers. They are also less willing to protect campus speech that is bullying, offensive and hateful. In general, the findings suggest that students have a general understanding of the scope and purpose of the First Amendment and support healthy debate in public university settings, but are hesitant to engage in debate about controversial issues, particularly within classroom settings. The report recommends more education and research regarding how the University can help students grapple with controversial subjects in politically partisan times.