By Victoria Ekstrand on October 8, 2019 in Center for Media Law and Policy, First Amendment 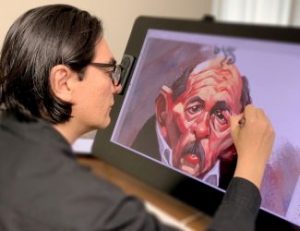 In the midst of turbulent political times in the United States, it’s easy to forget that pressures on press freedom are everywhere these days. Tonight’s talk by Pedro X. Molina, which was co-sponsored by our Center, was a stark reminder of that.

In 2017 Pedro X. Molina was a prolific participant in the #FreeNseRamon campaign demanding freedom for fellow illustrator and political cartoonist, Ramón Nsé Esono Ebalé, who was imprisoned for his work criticizing his country’s government, Equatorial Guinea.

Pedro X. Molina, also known as ‘PxMolinA,’ is an internationally acclaimed political cartoonist, illustrator and journalist from Nicaragua. In December 2018, when the offices of news media outlet Confidencial were taken over by government forces and during a national crackdown on journalists and government critics, Molina fled his country. He and his colleagues continue to publish daily in Confidencial.com.ni, either from exile or from other locations in Nicaragua. In summer 2019, Molina won the prestigious Maria Moors Cabot Award in international journalism from Columbia’s School of Journalism. In 2018, Molina won the Courage in Editorial Cartooning Award from Cartoonists Rights Network International, as well as the Excellence in Journalism award from the Inter American Press Association.

Esono Ebalé’s work and Molina’s contributions to the #FreeNseRamon campaign are both featured in  ‘The Art of Resistance’ exhibition on display throughout the FedEx Global Education Center until December 13, 2019. Come hear/see Molina share his work in Nicaragua and his efforts to support freedom of expression everywhere.

Molina reminded those of us who attended his talk that fanaticism is rampant across the globe, and that citizens must advocate for human decency over ideology.

What Germany May Teach Us About Platform Regulation
Center Student Spotlight: Ashley Fox

One Response to Pedro X. Molina Speaking on The Art of Resistance