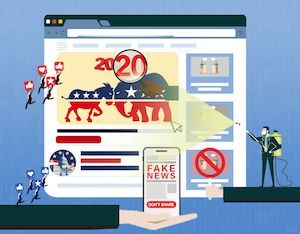 On Friday, Oct. 14, the UNC Center for Media Law and Policy will host an interdisciplinary lunch with Professor David Ardia, Reef C. Ivey II Excellence Fund Term Professor of Law and co-director of the Center for Media Law and Policy, and Evan Ringel, Park Doctoral Fellow at the UNC Hussman School of Journalism and Media.  They will lead a discussion about their recent article titled First Amendment Limits on State Laws Targeting Election Misinformation, 20 First Amend. L. Rev. 291 (2022).  The article expands on a whitepaper the Center published in 2021 that cataloged state efforts to regulate election-related speech (available on SSRN).

Here is the abstract:

The last two presidential election cycles have brought increased attention to the extent of misinformation – and outright lies – peddled by political candidates, their surrogates, and others who seek to influence election outcomes. Given the ubiquity of this speech, especially online, one might assume that there are no laws against lying in politics. It turns out that the opposite is true. Although the federal government has largely stayed out of regulating the content of election-related speech, the states have been surprisingly active in passing laws that prohibit false statements associated with elections.

Prompted by concern about the impact of misinformation on the American electorate, we set out to assess the extent to which existing state and federal laws limit election misinformation and the prospect that these laws will survive First Amendment scrutiny. In doing so, we reviewed more than 125 state statutes that regulate the content of election-related speech, ranging from statutes that prohibit false and misleading factual statements about candidates to laws that indirectly regulate election-related speech by prohibiting fraud and intimidation concerning elections.

What we found is that state statutes regulating election misinformation vary widely in the types of speech they target and the level of fault they require, with many statutes suffering from serious constitutional deficiencies. Statutes that target defamatory speech or speech that harms the election process, is fraudulent, or that intimidates voters are likely to be permissible, while statutes that target other types of speech that have not traditionally been subject to government restriction, such as statutes that target merely derogatory speech, will face an uphill battle in demonstrating that they are constitutional. Furthermore, statutes that impose liability without regard to the speaker’s knowledge of falsity or intent to interfere with an election are especially problematic.

Political speech has long been viewed as residing at the core of the First Amendment’s protections for speech. Yet it has become increasingly clear that lies and other forms of misinformation associated with elections are corrosive to democracy. The challenge, of course, is in developing regulatory regimes that advance the interest in free and fair elections while at the same time ensuring that debate on public issues remains uninhibited, robust, and wide-open. This is no easy task. Regardless of whether individual statutes survive First Amendment scrutiny, it is useful to understand the breadth and depth of state attempts to deal with lies, misinformation, intimidation, and fraud in elections. As we point out, any legislative approach to combatting election misinformation must be part of a broader societal effort to reduce the prevalence of misinformation generally and to mitigate the harms that such speech creates.

The lunch discussion will be held from noon to 1:15 pm on October 14 in the Freedom Forum Conference Center in Carroll Hall and also available via Zoom.

Please use the registration form below if you will be attending in person (you can disregard the warning message). The Center will provide lunch to in-person attendees who RSVP by noon on Wed., Oct. 12.

Please use this link to register to attend the talk remotely (via Zoom).


Warning: count(): Parameter must be an array or an object that implements Countable in /opt/app-root/src/wp-content/plugins/events-manager/templates/placeholders/bookingform.php on line 16
Tagged: First Amendment, Interdisciplinary Lunch Series, Misinformation