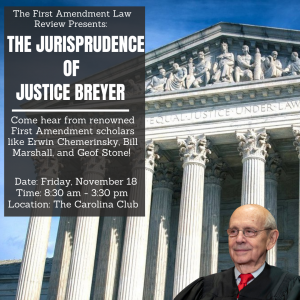 On November 18, 2022, the Center for Media Law and Policy will be joining with the First Amendment Law Review to present a symposium on “The First Amendment Jurisprudence of Justice Stephen Breyer.” Stephen G. Breyer served as an associate justice of the U.S. Supreme Court from 1994 until his retirement in 2022. Over his nearly three decades as a Supreme Court justice, Breyer cultivated a reputation for pragmatism, especially with regard to the First Amendment.